Let’s talk about car clubs. This may remind you of films like The Fast and The Furious where car enthusiasts show off their turbocharged machines and a bit of attitude. Call the movie fiction, but the thought of this turns a car clubber’s mood on. However, pretty much the opposite, car clubs are really family-focused and values-oriented just like Team Hyundai Philippines (THP).

Founded Out of Good Deeds

Rico Soriano, president of Team Hyundai Philippines for four years, narrated how the club began—tracing its roots to a noble cause.

“Team Hyundai Philippines started in 2009 right in the aftermath of Typhoon Ondoy,” said Rico. “At a time when the four original sub clubs—Team Starex, Tucson, Santa Fe, Getz Club Philippines— joined together to donate relief goods to victims of the calamity.”

“Before, the clubs would do meet-ups at gas stations, and chatter on online forums. Thankfully, there is Facebook, we use it now as our primary tool for communication. That is when the Team Hyundai Philippines really had grown its members,” said Rico as he saw how social media helped the car club to round up more people into the group from early 2009.

“Now each Hyundai sub-clubs have their own Facebook pages where members can express their thoughts, at the same time get some tips on how to use the car or maintain it properly,” said Rico. And the rest is history.

“We have partnered with Hyundai dealers across from Hyundai Ilocos Norte to Hyundai Davao,” said Rico. He would organize monthly meetups or so-called “eyeballs”, fun runs, sports fests, and outreach programs. 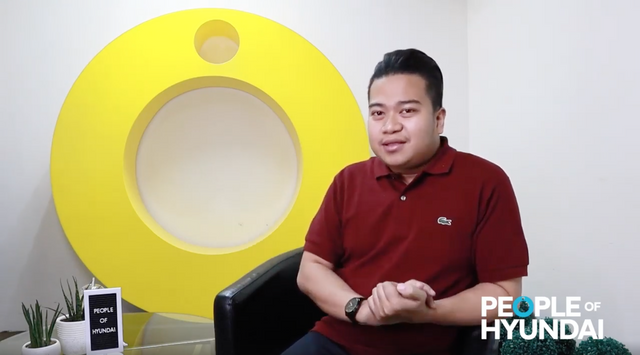 “I’ve been organizing events for THP, and promoting the Hyundai brand around the Philippines,” Rico shared as he laughed at the thought that he has been chosen as THP president for four years consecutively. While it comes with big responsibilities, he finds the thrill of being closely involved with his car club activities such as organizing events and coordinating for sponsorships.

Rico shared how he started as a car club member.

“I was one of the first owners of Elantra Manual Transmission when it was introduced to the Philippines, then I joined my peers and became public relations officer of Team Elantra.”

Rico exposed himself to the ins and outs of managing a car club starting from a sub car club and as an officer.

“But my first Hyundai ever was a Tucson, handed over from my Dad”, Rico recalled proving that he has been a Hyundai aficionado even THP started. He has advocated Hyundai and lived up to it by having his collection of Hyundai Accent, Tucson, and H350. Raising the bar high, Rico has also ordered to purchase a Hyundai truck for his business.

What is in it for Rico? He just loves driving for leisure and work. “Being a licensed real estate broker and having a construction business, I used to travel a lot around the Metro, I would often go to Santa Rosa, Laguna or Santa Maria, Bulacan, also before joining car clubs I just loved to travel.”

Rico Soriano is no doubt, a part of the People of Hyundai.

Hyundai’s line of cars, and brand design are loved by many Filipinos for its economical and environment-friendly qualities. Check out the Team Hyundai Philippines Facebook page to see reviews, testimonials, and tips on your Hyundai, and stay updated on THP-related events.